Earlier this week, I was contacted by Don Lawie, one of the volunteers at Gordonvale’s Mulgrave Settlers Museum. His email contained a link to a newsletter he had recently prepared for the Society for Growing Australian Plants. Don drew my attention to the piece called “Beautiful Plants of the Tropics”, one that he had written following his visit to Cairns Museum for the opening of the latest temporary exhibition.

I first met Don in my capacity as MDO for FNQ and have always been aware of his knowledge and love of local history and the region, despite his struggles with Parkinson’s Disease. But I didn’t know about Don’s interest in Australian plants, and his article’s closing sentence stopped me in my tracks:

“I will never see D. fleckeri alive, but thanks to Cairns Museum I have seen a lasting specimen collected and mounted by one of my heroes.”

Here in a single sentence, Don captures the value of museums: the joy that a single artefact can bring to a visitor, the wonder of ‘the real thing’, the importance of preserving collections, the significance of local collections and the value of sharing knowledge across the community. As a museum worker, this shows me the different ways people access and read the items on display, and it validates my interest in interpreting our environment as part of a region’s social history, and the importance of national history collections and herbariums.

Don’s email inspired me to go back into the museum and seek out the display, and to see what it is that captured his imagination. I also got online to find out more about the specimen, dendrobium fleckeri and found that its common name is the apricot cane orchid. I hope to work with Don and use his memories of Babinda’s orchidologist, and former Babinda Mill worker, Jack Wilkie as part of a larger story as we develop Babinda’s new museum. For now, however, I’m just going to share Don’s article (with permission), and the delight of his discovery.

The refurbished Cairns Museum is filled with treasures that recall the past of our part of the world. On a recent visit I was excited to find a treasure that made my heart beat faster and my tremors go into overdrive. There, on the first floor, in an unremarkable corner, was a dried and mounted specimen of a Dendrobium orchid. I found this fascinating since the expertly mounted specimen comprised the entire plant – leaves, rooted stem and inflorescences. I have long understood that such a mounted specimen is impractical due to the general features of a Dendrobium orchid. This specimen was collected on Mount Bartle Frere in 1947 and is still in good condition – good enough for an I.D.

Why does this specimen excite me? The collector was Babinda’s Jack Wilkie. Jack was an indefatigable explorer of the mountains and rivers in the vicinity of Babinda; he found and named a number of orchid species previously unknown to Australia , and several were named in his honour (unfortunately, they had been previously described overseas and so the original name had to supercede the wilkiei name).

I knew Mr Wilkie when I was a boy and he was a loco driver for Babinda Mill. He used to give my brother and me a ride in the steam loco cab when he went down the spur line to our farm at Fig Tree Creek, letting us toss coal into the roaring maw of the fire box. Many years later Pauline and I had the honour of being present when Orchidologist Bill Lavarack presented the Australian Orchid Foundation’s Award of Honour to Jack Wilkie in acknowledgement of his immense contribution to the orchid world. And not many years later I was proud to be able to scatter some home-grown orchid flowers on his grave.

Dendrobium fleckeri occurs mostly on the higher mountains such as Bartle Frere, Bellenden Ker and Mount Lewis at altitudes above 900 metres. It prefers to grow on exposed rocks and can flower at any time of the year. The plant is small – the stems about 30 centimetres long – and the flowers are also small. Common name is Apricot Orchid and it is not found in cultivation since it will only grow in the weather conditions of our highest mountains. So, I will never see D. fleckeri alive, but thanks to Cairns Museum I have seen a lasting specimen collected and mounted by one of my heroes.

Yesterday, Mulgrave Settlers Museum in Gordonvale opened a new exhibition called ‘Beetles, Grubs and other Bugs’. Developed to commemorate the 100th year of sugar research at nearby Meringa Research Station (part of the Bureau of Sugar Experiment Stations) and highlight the importance of cane to the region’s identity, it featured the work of the station’s entomologists as they battled to help cane farmers overcome pests and diseases in the early 20th century.

Central to the exhibition are the display cases created by Edmund Jarvis between 1922 and 1932.  A science communicator pioneer, Jarvis created educational cases to help farmers better understand and manage issues affecting their crops. He crafted the displays using specimens, hand drawn diagrams, typed labels and early black and white images and held information days at the station.

You might recall an earlier post from May 2015 outlining details of the cases at the time I was approached by staff at Meringa seeking advice on preservation and storage. Since then I contacted the Mulgrave Settlers Museum about acquiring the cases – there is a strong link between Gordonvale and Meringa, with the first research station being located on Thumm Street just near the present day museum. Thanks to a Regional Arts Development Grant (RADF) from Cairns Regional Council, the cases have also undergone conservation treatment and made ready for this new exhibition. Thanks to conservator Sue Valis at MTQ for her meticulous cleaning and attention to detail. 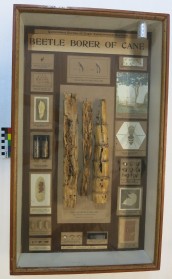 The RADF grant allowed the museum to purchase a large format scanner to digitise hundreds of images and glass plate negatives that were also part of the donation.  These images also feature in the new exhibition, as do a number of other significant artefacts including a lantern used in breeding programs, injectors and sugar refractors (which help to measure sugar content in cane) as well as a microscope belonging to James Buzzacott (on loan from the Australian Industry Sugar Museum in Mourilyan). 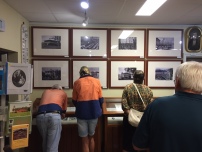 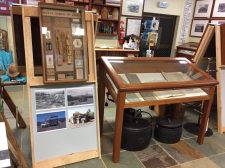 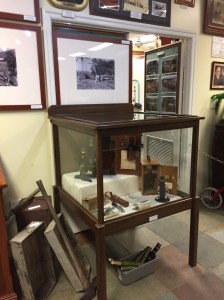 James Buzzacott’s microscope which was kindly loaned to the exhibition by the Australian Sugar Industry Museum in Mourilyan. Image: Jo Wills.

The breeding lantern – not to be mistaken for a shower curtain or changing room! Image: Jo Wills 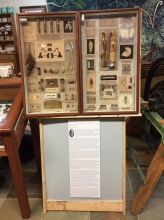 Council support also meant that the museum could work with the MDO to create a new exhibition, install a new hanging system, reline cases  and rearrange the displays to showcase the research they had undertaken into the cases and the work of Meringa. An exhibition development workshop was held early in the year to set out the parameters. Lead by Travis Teske, the volunteers collaborated with Meringa Station staff and each other to pull the project together.  One built timber easels to display the cases, and all hands were on deck for the installation and rearrangement.

The exhibition is open for 6 months. The museum is located near the Mulgrave Mill at 60 Gordon Street, Gordonvale

It’s not often I get called to look at natural history or entomological collections. And, when I was contacted by staff at Meringa Research Station near Gordonvale to come and assess the condition of some old display cases, I must confess to being a little skeptical. Imagine my surprise, then, when a little bit of research into their creator, Dr Edmund Jarvis, revealed that these cases were going to contain more than your average cane beetle displays.

Dr Jarvis was an entomologist from the early 20th century. He ended his career as the Chief Entomologist to Queensland’s Bureau of Sugar Experiment Station, and specialised in cane beetle research. Prior to this, however, he had a museological career. After moving from Devon, England to Australia, his first job was a Acting Assistant Entomologist, National Museum, Melbourne in 1903 (now, Museum Victoria). In addition to his scientific training, he was well known for his skills in line drawings and water colours.

On site, it was immediately clear that the displays had been arranged by someone with a museological eye. Seven timber framed cases, which date between 1922-1932, had been ‘curated’ to ensure that information is conveyed in an educational manner. They contain a mixture of specimens, line drawings, photographs and labels – all laid out to make the subject matter as accessible as possible. The cases illustrate the research undertaken into pests impacting the sugar industry during the 1920s by the Bureau of Sugar Experiment Stations.

Bureau of Sugar Experiment Stations were, established under The Sugar Experiment Stations Act of 1900 and were initially administered by Queensland’s Department of Agriculture. Employees undertook research to assist growers and millers improve the breeding, planting, growing, harvesting and milling of sugar cane. The focus on the cane beetle, and other cane related pests, demonstrates the importance of the research stations, the work they were conducting, and of the value placed upon the cane industry in Queensland in general.

In valuing these cases, I have come to think of them as more than just the work of a scientist, but as the work of a fellow museum worker with a passion for conveying information to different audiences. I am hoping to secure funds to assist with the conservation of the cases, and a way to interpret them further – in consultation with staff at Meringa.