Last month four museums in the Mackay region collaborated on an exhibition to mark the 100th anniversary of the cyclone which struck the region on January 20th 1918. The exhibition was valuable in not only gathering together information and objects to commemorate this devastating event, but also in acting as a timely reminder of our continued vulnerability to severe weather events.

The cyclone, considered a category 4 in today’s system, caused widespread devastation from Mackay and down the coast as far as Yeppoon and Rockhampton. It was responsible for substantial losses in the sugar and beef industries, and claimed 30 lives in Mackay.  Mackay Museum, Greenmount Homestead, Pioneer Valley Museum, and Sarina District Historical Centre collaborated with the assistance of Mackay Regional Council and the MDO programme to gather together information, photographs and objects to create “In the Path of the Storm”. By combining in this way to produce the exhibition, the museums were able to present a region wide interpretation of the event and its impacts.

By the very nature of the event the museums were commemorating, objects were going to be hard to come by. But the museums demonstrated what treasure troves community collections can be. Greenmount Homestead contributed a diary kept by Albert Cook at the time of the cyclone as well as an impressive print by Tom Roberts which had been water damaged at the homestead during the cyclone, and which still bore the watermarks. Mackay Museum contributed a model of the brave little Eleanor, the only vessel to survive the cyclone intact and which was crucial in the recovery efforts in the days following the cyclone, when Mackay was completely isolated from the rest of the world. The original vessel is on display at the Mackay Museum. On loan to Mackay Museum from the Queensland Museum collections were the twisted remains of the Brinawarr, a steamship which broke free from its moorings during the cyclone and crashed into the bridge over the Pioneer River, severing communications between north and south Mackay. The remains of the Brinawarr were only rediscovered during the construction of a new bridge in 2009.

The exhibition was held in the Jubilee Community Centre and was the first major exhibition in this new space created from the former library. Community response to the exhibition has been enthusiastic, with many visitors engaging through opportunities to tell their own family’s story of the cyclone. One hundred years on, memories of the event passed down are still painful and vivid.

The exhibition banners have now left the Jubilee Community Centre and begun a tour of the region, first stop Melba House at Marian. So keep a weather eye for the banners coming to a venue near you!

“In the Path of the Storm” at the Jubilee Community Centre

The exhibition opening event was well attended and included special guests such as Eileen Welch, who was 5 years old at the time of the cyclone, and the niece of Jack Vidulich, who signalled the first SOS morse message from the devastated town.

Photographs graphically captured the damage in the days following the cyclone.

Items from the steamship ‘Brinawarr’, sunk during the cyclone and recovered in 2009.

Objects retrieved from the Pioneer River included parts of the compass and binnacle, as well as letters from the ship’s name and port of registration.

Model of the ‘Eleanor’, Albert Cook’s 1918 diary, and lamps from a buggy belonging to Albert Cook which was damaged in the cyclone. 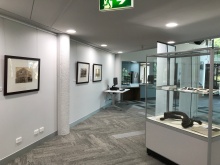 Visitors could also interact with the photographs from the exhibition via a HistoryPin webpage, which allowed a unique geographical “then and now” perspective.