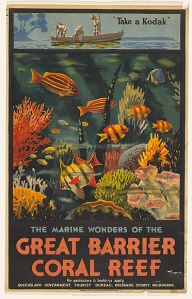 People’s desire to see  beneath the surface of the sea has inspired a myriad of underwater viewing objects and inventions. From hollow reeds to Leonardo Da Vinci’s early diving apparatus, there has been a whole raft of weird and wonderful creations inspired by our fascination with coral and the reef.

I’ve been exploring the way people have viewed coral recreationally on the Great Barrier Reef and around Cairns as part of my research for Cairns Museum’s new exhibitions. Drawing on material culture and academic research, I’ve found we can make some interesting observations about north Queensland’s contribution to the evolution of coral viewing.

Early visitors to the reef used hand held viewing devises known as coralscopes, waterscopes or glass bottom floats. Made from aluminum and a clear Perspex or glass, these were either boxes or tubes that were held over the side of the boat and provided the user with a stable viewing lens.

“The exclusion of surface turbulence meant that the scene through a waterscope was sometimes in stark contrast to the surface of the water … The waterscope thus opened up, not only fear, but a delight in the other that constituted the underwater world.” (Celmara Pocock, (2003). Romancing the Reef: history, heritage and the hyper-real. PhD thesis, James Cook University, p. 231).

Queensland Museum holds one example in its collection (see below). Cairns Museum and the State Library of Queensland hold a range of photographs that illustrate people viewing coral over the side of the boat. Does anyone know of other examples in other collections around the state or country? 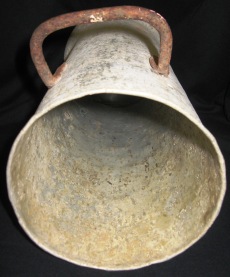 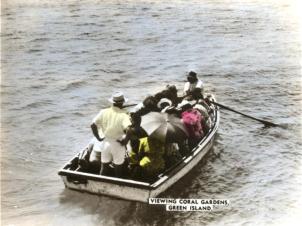 Glass bottom boats were another early form of coral viewing. In 1937, the Hayles family launched the worlds first glass bottom boat at Green Island. Accompanied by music, these boats were ‘allowed to drift over deep channels so that passengers can view the teeming waterlife through the glass in the bottom.'(Tourism Guide book) Adapted later in the 1940s, these vessels continue to be used on the reef today, providing access to the underwater world for those who prefer not to immerse themselves.

Local entrepreneurs Lloyd Grigg and Vince Vlassof, were involved in creating another underwater viewing first for the region. In 1954, they opened the Green Island Underwater Observatory, a 10m chamber with 22 port holes, situated at the end of the jetty. Bought for 400 pounds, it was converted from an underwater diving chamber used in WW2 to erect pylons, and taken out to the island and sunk into position.  A shop and residence were erected above it and coral formations bought in from other reefs to attract fish. The underwater observatory remains on the jetty but is no longer open to the public.

New innovations, like the Scubadoo – an underwater scooter – and more advanced diving equipment have revolutionised the way we interact with and view the reef. But these three objects provide special insight into the innovations the region has used to make the Great Barrier Reef’s underwater gardens more accessible to visitors and enthusiasts.

Stay tuned – there are many more fascinating stories being uncovered as the research for Cairns Museum’s redevelopment continues.