← Follow up from Cyclone Nathan, FNQ
“I got a bit tired at the last” →

ANZAC: a day in the life of…

With the Anzac Centenary Commemorations well under way, many organisations are working towards projects remembering their community’s contributions and experiences of the Great War. One such project

ANZAC: A day in the life of opening night

is the exhibition ANZAC: a day in the life of…The exhibition is a collaborative work by the Museum Development Office of South East Queensland, in partnership with the Scenic Rim Regional Council and Museums of the Scenic Rim Heritage Network. It is also part of a year-long program of exhibitions and activities focused on the War years in the Scenic Rim.

The exhibition aims to explore some of the stories of local identities associated with the Great War. With phenomenal enlistment and casualty figures for the region, it could only

ever examine a small cross section of some of the regions soldiers, pilots and nurses who served during the period. Amongst those featured were Corporal Bernard “Barney” Gordon VC MM, Corporal John “Jack” Evan Bartle MM DCM, Major Bertram Charles Bell DSO DSC, Private Charles Chesworth Burgess, Private Michael James Enright, Nurse Nita Selwyn-Smith, and Pastor Christian Seybold. It also provided a challenging look at some of the less prominent aspects and personalities of the regions WW1 history, such as

residents of German heritage, and those injured or incapacitated by their experiences at war. 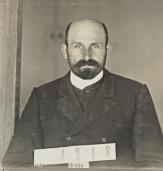 The Scenic Rim region has had a large population of German and Prussian settlers, with quite a number of Lutheran followers. With a rise in anti-German sentiment after the outbreak of war, there were a number of incidents involving those of German descent. One such story was that of the arrest of Dugandan Pastor Christian Seybold who was later interned at the Holdsworthy internment camp in NSW and deported back to Germany. Seybold was accused of preaching pro-German sympathies to his congregation, allegedly encouraging them to pray for the success of the German army and decorating his church in black after the success of an allied battle. It is unclear if these claims were ever substantiated officially, or were the effects of overzealous patriotism tinged with xenophobia. 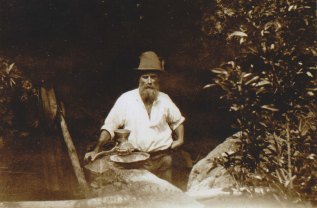 Another fascinating character affected by the war was returned soldier Private Charles Chesworth Burgess. Suffering from shellshock and other undefined physiological trauma caused by a severe gunshot wound to the head, Burgess returned home only to be denied assistance in resettling and treatment. He took up residence in a series of caves on his property, living a simple subsistence lifestyle and growing his own vegetarian food. He prescribed to principles of nonviolence as promoted by The House of David, an American religious movement, and grew his hair and beard long. His experiences at war and on return undoubtedly distanced him from his home community.

At the opening last Friday a fantastic evening of entertainment was held, with two-up games (for matchstick stakes, of course!) and good old fashioned sing song of period tunes, reminiscent of the patriotic balls of the day. Anzac: A day in the life of… will be on display at The Centre, Beaudesert, until the 27th of May 2015. An abbreviated satellite version will also be on display at the Boonah Cultural Centre.

← Follow up from Cyclone Nathan, FNQ
“I got a bit tired at the last” →