Racing on the River: Tambo backs 150 years of winners!

Keen punters from Western Queensland and beyond gathered in Tambo this year for a very special race meet to mark 150 years of horse racing. In the long history of Queensland racing, Tambo lays claim to the earliest organised race day west of the Great Dividing Range.

With horses being the most common form of transport at the time, it is no surprise that the first organised horse races were held in the district on the 20th and 21st of July 1864, barely one year after the gazetting of the township. No doubt fuelled by community spirit and the posturing of both riders and breeders, the first race was hosted by Henry L. Harden, owner of Northampton Downs station. The event was staged under the name of the Great Western Downs Race Meeting and saw 4 races each day, with 21 horses entered by 14 owners. Prizes included a number of silver trophies, silver spurs, and around 54 sovereigns prize money- not a small sum for the time! 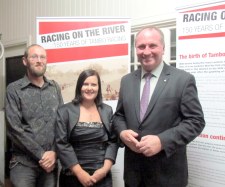 To help celebrate the event, the Central Queensland MDO worked with the Tambo & District Race Club to develop and produce Racing on the River, a travelling exhibition exploring the history of racing in the district.

An exciting discovery was made during the exhibition development: the location of the first racing trophy, “The Northampton Downs Cup”. With community assistance, this holy grail of Tambo Racing history was traced back to a private collector in Toowoomba. Mrs Diana Mayall was kind enough to loan the precious piece of history for part of the exhibition.