The Cardwell and District Historical Society recently hosted Ewen McPhee and Dr Jo Wills for two days to prepare the museum for opening.  The Museum Development Officer (MDO) program has been assisting the Cardwell and District Historic Society and Cassowary Coast Regional Council since Cyclone Yasi caused widespread damage to the museum and the community in 2011.  You can view some of these previous posts if you click on the “Cardwell” tag on the right hand side of the blog.

The original hall was constructed as the Cardwell Divisional Board Hall in 1892.  It was located within an early government precinct on Victoria Street, Cardwell, and stood directly opposite the original Cardwell jetty.  Cyclone bracing in the hall, which you can still see today, ensured this building withstood numerous cyclones up until Yasi.  Severe damage has meant that the only remaining original features are the stage, dressing rooms, honour roll and  the Cardwell Shire Council table.

The interior of the museum

Rebuilding the museum has been a major project for the historical society and involved many discussions to determine the best outcome. One of the positive aspects of new construction has been the chance to inform the builders of design needs for an exhibition space.   A key requirement for the hall was that it was to be more than just a new museum; it was to also be a multi functional community space.  All cases and newly built plinths were placed on castors to ensure that they could be easily moved to accomodate functions and community events.  As part of the museum rebuilding process, new exhibition cases have been set up to tell a variety of stories through exhibitions. 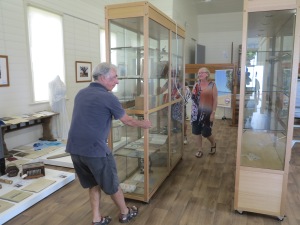 One of the major displays the MDOs worked on with the community,  tells the story of Cyclone Yasi and the impact that it had on Cardwell. This is done through digital images, oral histories and objects.  The ability for the historical society to collect and store objects associated with the cyclone has been limited.   However, now that there is a new building it is expected that the collection will grow significantly.  The historical society has a large collection of digital images that show the aftermath of the cyclone and more contemporary images as the town rebuilds.  They have also actively engaged in recording oral histories and have run community workshops.  These oral histories are available to listen to and view and are a powerful reminder of what the community went through and how they are recovering.

Murray and Stephanie in the Cyclone Yasi display 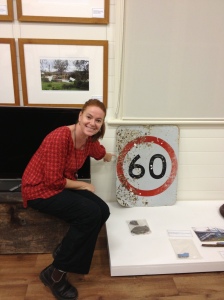 One component of the display explores the impact that Cyclone Yasi had on people’s homes in Cardwell.  The verandah doors  belonged to Murray Massey and were part of the original Hubinger Family Home in Victoria Street that was built in 1912.   Built by John Hubinger and his brother Joe, it was home to a family of 14 and a social gathering place. Almost 100 years later it was demolished in December 2011 after severe damage in Cyclone Yasi.

Murray Massey with his verandah doors.

One of the objects that was damaged by the cyclone is a dress made by Stephanie’s grandmother. Material, initially of deep, imperial purple hue, has now partially faded, and some sections have been shredded. Despite this damage, the dress is significant as both an heirloom for one of the district’s prominent families and as an example of changing fashion styles at the turn of the 20th century. Stephanie recalls her grandmother as an industrious woman with a particular talent for dressmaking. Each section of material that makes up the dress has been signed by her grandmother – a practice she followed with every garment she made. Stephanie is also a keen seamstress and used to run a sewing and interior design business in Cardwell. Her dressmaking skills mean she is perfectly placed to appreciate the workmanship, style and materials in the damaged garment. Stylistically, it demonstrates the trend to reduce the size of the bustle in women’s dresses at the turn of the 20th century. The hand sewn holes for fasteners and the gathered detail around the bustle are also evidence of the detailed needlework women needed to make their own clothes.

Ewen McPhee and Stephanie Berger with the damaged dress

The following Yasi publication is for sale via their website with a second publication due out in May. 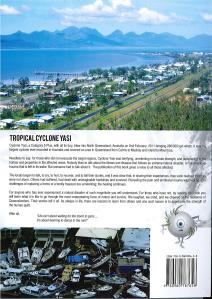 Other displays the MDOs worked on included a small exhibition on the Kirrama Range and its development.  There is a strong push within the community to tell the story of the early timber getters and relate it to the current day forestry. 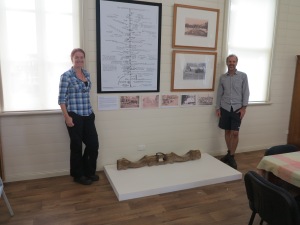 The Roll of Honour, located on the stage, will be a key object in a exhibition marking 100 years since the start of the First World War in 2014.